Divisions in society are sharper now than for some years, between young and old, left and right, poor and wealthy, immigrants and the indigenous population, leavers and remainers, nationalists and unionists etc.  The task of building social consensus seems enormously difficult. There are so many different opinions about everything, and it seems that everyone wants their point of view to be the one that prevails. People seem very willing to pick an argument about anything and everything.

The role of religion in building social consensus has been mixed. Many intractable conflicts are intertwined with religious issues, such as that between Israel and Palestine, or between the Republican (Catholic) and Unionist (Protestant) elements in Ireland. Even if religion hasn’t actually caused the conflict, it can provide a rationale for keeping it going, so one community can pursue hostilities against another with a sense of principled self-righteousness.

On the other hand, religion can sometimes help to unify, and I am persuaded by Robin Dunbar’s argument that it was embryonic forms of religion like trance dancing that helped early humans to do social bonding with larger numbers and more effectively than any of our primate ancestors. But Dunbar also argues that religion tends to do social bonding best with small numbers (such as ‘Dunbar’s number’ of 150). It is less good at unifying larger groups, and can all to easily fuel conflict between small groups, rather than bringing overall unity. 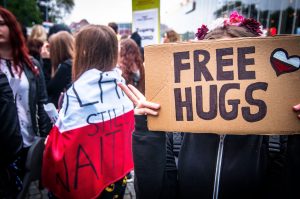 However, there does also seem to be a kind of ‘species altruism’ that leads one human to care for another, just because they are fellow humans. This ‘species altruism’ seems to be triggered by pictures more than words. It is almost always pictures rather than words that trigger outrage about human suffering, such as a picture of a dead migrant child washed up on a beach in the Mediterranean.

We need to build on this instinct if society is to hold together. We need something that will kick in before we get to extremes of suffering. Both left and right have experimented with totalitarian regimes that over-ride personal opinions and foster nationalistic cults around a dictator. It is easy to see why that can be appealing, and it can bring social unity. However, the price that has to be paid for social cohesion in terms of suppression of individuality is very high, and it often leads to violence and war.

Is there a better way? I think there might be, though I am aware of the risk at this point of lapsing into idealism.  I suggest that the way forward lies through developing a stronger sense of interdependence that celebrates diversity and values it. Society would be less interesting and less effective if we were all the same; we need different kinds of people.

One of the most celebrated religious sources of this valuing of diversity is St Paul’s analogy between the church and the human body. His point is that in a church community there need to be different gifts; and each person needs to value people with gifts different from their own. Otherwise, he says, a community becomes like a human body in which there is no appreciation of the value of having different parts. A body would be no use if it were all ears, or eyes or hands. It needs different parts.

Developing this sense of inter-dependence is not going to be easy, but I see no alternative if we are to manage human diversity, and develop a kind of social cohesion that celebrates differences rather than allowing them to drive us into factional disputes.