I have recently become aware of an intriguing convergence between the Social Brain theory of Professor Robin Dunbar at Oxford, and the Congregation Size theory that has been developed largely in the USA.

Dunbar is best known for ‘Dunbar’s number’, 150, the number of people with whom we can maintain stable social relationships. However, Dunbar actually recognizes a series of numbers such as 5, 15, 50, 150, 500 etc. Each number represents a barrier. If you want to go beyond it, you need different bonding strategies that are more time-efficient, and the nature of your relationships changes.

Congregation size theory also recognizes a similar series of numbers. Congregations grow up to a certain limit and get stuck there unless there are structural changes that enable further growth. 150 is a particular barrier and seems to be the limit to the number of people any one person can pastor. To get beyond that limit you need a more federal structure. 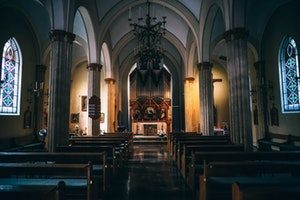 It was interesting to discover some old empirical research on this from the 1950s by the Revd. A B Mishkin. Examining a very large database he found that the number of Easter Communicants per church tended to hover around 153 (remarkably close to Dunbar’s number). Interestingly, the size of the parish population did not make much difference to that number; churches only got much above 153 if they had more than one minister. That is what you might expect from Social Brain theory.

There are pros and cons in different church sizes. The advantage of a small congregation is that you can know everyone; the minister can also know everyone and be available to them. The advantage of large numbers is that they generate more excitement and uplift. Different people have different preferences, given that choice. Some prefer large, some prefer small. There is always a trade off, and there is a cost associated with larger numbers.

Bonding with group sizes of 150 was something of a breakthrough for emerging humanity. It is much larger than the mutual grooming circle of our primate ancestors. Mutual grooming may be a nice way of bonding, but it is very time-consuming and inefficient. Dunbar sees shamanic trance dancing around the campfire, with its co-ordinated rhythmic movement, as being the key to bonding with larger numbers, such as 150. In that sense, early forms of religion were crucial the how humanity managed to do bonding with larger numbers.

The collective release of endorphins is also important. It is triggered by trance dancing, and delivers very powerful social bonding. The same thing happens with the rhythmic movements of a rowing crew, who often bond with each other very intensely. My simple hypothesis is that how much churches grow is predictable from how much their activities release endorphins.