I think that churches and other religious communities could do more to help people with minor mental health problems. Churches can probably make even more difference with mental though with physical health. The ‘walking worried’ (as one Psychiatrist I used to work with called them), are more numerous now than the walking wounded. And there is such a close intersection between mental and spiritual aspects of health that I think churches could really make a difference in this area. 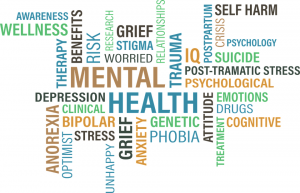 It would be a timely initiative in the UK, in the light of the prominence that the young Royals have given to mental health issues. It would also be an indisputably Christian (Jesus-like) thing to do. Healing was at the heart of what Jesus did. He was a healer first and foremost, before being a teacher or religious leader; and I think the churches would do better if they tried putting people’s needs first, rather than ‘religion’.

Probably the main reason churches don’t do more is that they feel out of their depth and are anxious about making mistakes. At many points, churches are hamstrung by excessive anxiety. Anxiety and failure can feed into each other in a vicious circle.

Actually I don’t think it is too hard to help with mild mental health problems. So, here are some suggestions. I think there are three things to be done, and I think it is best to make a start on all three in the first meeting. There is an energy for change at the first meeting that is never quite recaptured, and there is a lot to said for taking full advantage of that.

The first thing to do is just to listen. That is important for the pastor so she or he knows what they are dealing with. But, quite apart from any information that is transmitted, listening helps the person to feel understood, and that is crucial. The pastor needs above all to be empathic, to sense where the other person is coming from, and to give them the opportunity to unburden themselves and get things off their chest. That doesn’t call for any great professional expertise.

Next, it is helpful to give one or two bits of practical, common-sense advice. It changes things for people to feel that there is something constructive they can start to do. For those with even a rudimentary knowledge of cognitive behaviour therapy, it is a useful store of good practical tips, but most people can get there by common sense. For example, if there is something a person wants to do but is finding hard, think of first steps they can take that make it as easy as possible, and get them started. And encourage people to stop beating themselves up about not being able to do the impossible.

Third, it helps to pray with the person, and I think it helps that both a spiritual and a psychological level. It can be remarkably powerful to connect with the healing power of Christ, and to invoke it passionately and with confidence. I have repeatedly been surprised at just how powerful that is. Also, at a psychological level, it seems a very good way of gathering and focusing energy for change and seems to have a very powerful placebo-type effect. Things that have really been prayed for are more likely to happen, but the prayer needs to be serious, hopeful and committed.

The Theos think-tank will shortly be publishing a report on mental health, and I hope that will encourage the churches to be bolder in this area.