One of the biggest puzzles is how so many things in our lives are neither wholly good nor wholly bad, but some confusing mixture of the two. It is difficult to hold onto this complexity and there is a strong tendency to simplify things and to see only the good or only the bad. That is what some psychologists call ‘splitting’.

These issues arise in religion as well as in our personal lives, and I can illustrate this from the story of Jesus’ life, and how that is celebrated through the Christian year. When you look carefully, all the key stories are a complex mixture of light and darkness, though there is a tendency to simplify them and to see only one side of the picture.

In reality, everywhere you look in the story of Jesus, you find good and bad elements jostling together. I think it is really important to recognize this, as the annual commemoration of particular events in the life of Jesus can then do more to help each one of us in our journey towards personal integration. 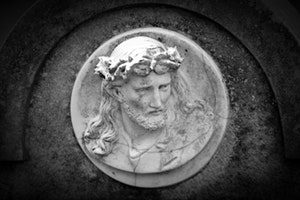 Let us start with Christmas, still much the most popular Christian festival, even if the celebration of it is often not particularly religious.  Every other Christian festival is widely ignored, but almost everyone takes notice of Christmas in some way or other. No one can get through December without hearing a carol about a baby born in a manger. For most people Christmas is purely festivity, but the actual Christmas story if you stop to think about it, is a remarkable integration of darkness and light.

In Luke’s well-known version of the story, a heavily pregnant woman is forced by an occupying power to take a difficult journey with Joseph to her home-town for a census. On arrival, she gave birth but, as there was no accommodation, her infant child was placed in a manger. Matthew says less about the birth itself, but has a dark story about how Herod, in an effort to kill Jesus, slaughtered every infant in Bethlehem. Jesus was only spared because his parents had been warned to escape as refugees to Egypt. This is not obviously a cause for celebration.

There are some brighter elements too, focusing largely on visitors. Luke has a story about shepherds on the hillside seeing angels, and Matthew has one about wise men from the East bringing presents. But the bright side of the story comes largely from the Christian interpretation of dark events as marking a decisive turn for the better in the human story.

Taken together the story is a paradigm of the integration of light and dark, of how good things can arise from very adverse circumstances. Maybe it is some dim awareness of that intermingling of adversity and hope that makes the Christmas story so popular, even if the celebrations of most people now largely ignore what is being celebrated.

This theme of the intermingling of light and darkness is a feature of almost every key event in Jesus’ life. The story of Jesus is as far removed from a compartmentalisation into light and darkness as any story could be; indeed it seems to be a protest against that kind of splitting into black and white.

That is true of the story of Jesus’ baptism, which is partly an uplifting story about Jesus coming up out of the river, and seeing the heavens open and the Spirit of God coming to rest on him. The sting comes in the tail, with Jesus going off into the wilderness for 40 days of fasting and temptation.

There is a similar conjunction of light and dark in the story of Jesus ‘transfiguration’. His three closest followers see him shining with a bright light, and hear a voice from the sky saying, ‘this is my beloved Son’. But the story comes shortly after Jesus saying that he will go to Jerusalem and that he will be put to death there, and it is followed shortly by another repetition of that prediction.

There is a similar intermingling of light and dark when Jesus arrives in Jerusalem. In some ways it is a hero’s entry, riding into the city, with cheering crowds. But he rides only on a donkey, which is a conspicuously helpful beast, and once in the centre of Jerusalem the mood soon becomes confrontational, and the cheering evaporates and turns into a demand for Jesus to be crucified.

The crucifixion itself is a terrible way to die, and a very dark story indeed. But it is lightened, by what Jesus says and does on the cross, in Luke by Jesus’ forgiveness of one of the criminals being crucified with him, and in John by his concern for his mother. As Thomas Kelly’s hymn puts it, ‘Inscribed upon the cross we see, in shining letters, ‘God is love’.

The Easter story of resurrection is actually a darker story than you would realise from most Easter services. The first intimation of Jesus resurrection comes to Mary while she is distraught and in tears outside the empty tomb. In Luke’s version, the male disciples remain terrified and confused, huddled in a locked room, until the evening. It is a story of the gradual alleviation of grief and fear.

I feel that Christians sometimes obscure this intermingling of light and darkness by making Good Friday all gloom, and Easter Day all joy. Neither is altogether convincing, not really true to the Bible story, nor to the realities of human life. The Easter vigil service, for those who go, is more faithful to the complexity of the story in starting (literally) in darkness, and gradually moving through to celebration.

Most people struggle, at least on occasions, with difficult events; and it helps to retain some good memories and some hopes for the future. Most people also have times of celebration, but they can seem frothy and ephemeral if they simply ignore problems and difficulties; then they become just some kind of escapism. My point is that of our personal stories are placed alongside the complexity of he story of Jesus, it provides resources to help us to hold things together.