One of the major festivals of the Christian year falls on Thursday this week, the Ascension of Jesus, 40 days after Easter. When I was a boy it was still a significant occasion, but it has lost ground badly in the last half century. 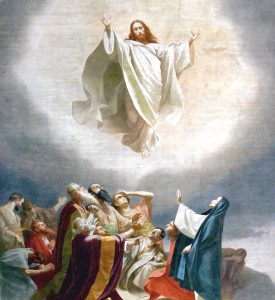 On the face of things, the Ascension is one of the hardest events in the story of Jesus to square with a scientific worldview. It marks the occasion, recorded at the end of St Luke’s gospel, and again at the start of the Acts of the Apostles, when Jesus says goodbye to his disciples, rises up from the ground or levitates, and disappears into the clouds.

I don’t think the credibility of Christianity stands or falls on this story. It is recorded by only one New Testament writer, which clearly indicates that it was not central to Christianity. It is much less fundamental than the resurrection of Jesus, which is important to every New Testament writer. I don’t find all the details of the story convincing, but I think the essence of the story stands up better to critical examination than many people realise.

Both physicists and theologians now agree that there are two domains of reality, one formed by dimensions of space and time, and the other not (though they differ in their ideas about the latter).

For physicists, there is a reality that preceded the big bang, thought of as a quantum vacuum, which has no dimensions of space and time, but from which our spatio-temporal world emerged.

Once we have a distinction between realities that have space and time, and those that don’t, we can say that the transition that the Ascension of Jesus represents is a one from a space-time world to one that is not bounded by space and time. It is a transition from a mode of being that is to be found in one particular place at any specific time, to one that is present anywhere and everywhere.

But there is still a question about the apparent levitation of Jesus as the way in which this transition is made. Human bodies do not normally levitate in this way.

However if, for the sake of argument, you go along with the story of the resurrection of Jesus, his risen body was clearly not an ordinary body. St Paul is very emphatic about this (1 Corinthians 15). According to him, the risen Jesus had a spiritual body, not a fleshy body.

We don’t know much about such bodies, but I assume they have less mass than ordinary bodies, and function in different ways. The stories about the risen Jesus in the Gospels support the view that his body was not an ordinary body and behaved in unusual ways. With less mass, levitation would have been more possible than for an ordinary body.

But I don’t think the rising up of the body of the Jesus is the essence of the story. His ‘ascension’ may be no more than a metaphor for claims about his ‘ascendancy’, which have emerged in story form, given the less literal mind-set of people of Jesus’ time.

The core of the story seems to be a transition from a mode of being that is specific to time and place, to one that is not. I suggest that is an intelligible claim. Whether or not people find it convincing, it is a claim that modern physics at least helps us to formulate more clearly than was possible in New Testament times.